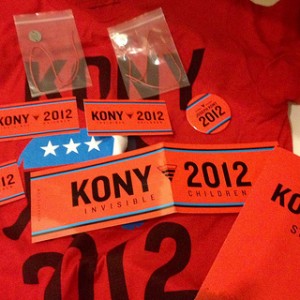 ‘Kony 2012’ has now be viewed by over 100 million people from all across the world – and if you have not heard of Kony by now, you will!
It’s the dream and vision of Jason Russell and his organisation Invisible Children to make Kony Famous so that he can be found and brought to trial.
Joseph Kony is the world’s worst war criminal. In 1987 he took over the leadership of an existing rebel group and renamed it ‘The Lord’s Resistance Army’ (LRA).
The LRA has earned a reputation for it’s cruel and brutal tactics. When Joseph Kony found himself running out of fighters, he started abducting children to be soldiers in his army or ‘wives’ for his officers. The LRA is encouraged to Rape, Mutilate, and Kill civilians often with blunt weapons. The LRA is no longer active in Northern Uganda but it continues it’s campaign of Violence in Democratic Republic of Congo, Central African Republic and Southern Sudan. In it’s 26 year history, the LRA has abducted more than 30,000 children and displaced at least 2.1 million people.

Jason Russell made a film called ‘Kony 2012’ to highlight the crimes of the LRA and to move the world to action. Their aim is to make Joseph Kony famous so that every person, especially those in positions of leadership and influence, take note and together, see this man removed. Through intensive lobbying of governments and broadcasting over the internet their dream is becoming true. People are responding, signing up and taking action to see this cruel and violent leader brought to justice. In fact the other day when I was walking through some local woods I came across a stone with ‘Kony 2012’ written on it. While you or I may not be able to do anything on our own – this world movement can.
On April 20 2012 ‘cover the night’ will take place as people are encouraged to put up posters of Kony and make his name and face unavoidable. The goal is to see this man removed and children to be released. The efforts of Jason Russell and his team have been immense and the impact has not been without effect. World leaders are taking note and the hope is by 2013 Kony will be captured.
I, along with millions of others support this and have signed up to see this dream become a reality. I encourage you to do the same.

While I support this venture I also dream of something greater to happen. My fear is that should Kony be brought to trial there will be another ‘Kony’ to replace him. Just before Saddam Hussain was captured he boasted that there would be a thousand more to take his place. The same happened with Osama Bib Laden – he may have been killed but there are many more lining up to take his place. While on holiday in Germany we visited Dachau, the former concentration camp. In the camp was a memorial which had been put there by some of the survivors. It was a promise that these things would never happen again. Sadly history tells another story – genocide is still all too common. My point is there will always be another Kony. While we may see the end of Joseph Kony the reality is there are many more who will continue to do the same. The dream of Jason Russell is great but I dream of something greater.

Today is Good Friday, a day when millions around the world remember and yes, celebrate, the torture and execution of Jesus Christ. The New Testament Gospels record for us what happened – the betrayal, the trial, the injustice and the agonizing death. Now while the suffering was great, many others have suffered far worse including many of the children Kony has abducted. But here is what makes the death and suffering of Jesus Christ so unique. On the cross Jesus cried out

‘My God My God why have you forsaken me?’ On the cross Jesus went beyond the worst kind of human suffering and experienced cosmic rejection. He suffered infinite separation from the Father, foresaken for you and for me. The bible tells us that this was God’s way to pay and deal with our sins so that he could end all suffering and evil without ending us.
But the story does not end there. Three days later Jesus would rise and walk out from the tomb. His resurrection is proof of the restoration and renewal that God has promised. This world as we know it will be made new. All evil and suffering will end. All that has been broken will be made beautiful. Every horrible experience will be repaired and will become better and greater. There will be no more Joseph kony’s and no one to take his place.
This is what I dream of and the death and resurrection of Jesus makes it a reality.
So rather than make Kony Famous lets make Jesus Famous. He is the one to end all wars. He is the one to change and transform lives. He is the one who can make the world we all long for a reality.

In the meantime we fight for justice we seek the removal of men like Joseph Kony and we do all we can to care for the abducted children. Why? Because this is what Jesus came to do – he came to rescue creation.

This site uses Akismet to reduce spam. Learn how your comment data is processed.